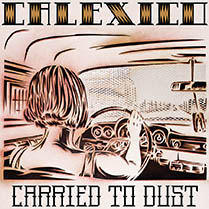 On September 9th this year, Calexico return to their more countrified roots with Carried to Dust, the follow-up to their disappointing Garden Ruin album. Their sixth record promises to be a return to form, and features guest appearances from Sam Beam of Iron & Wine fame as well as Douglas McCombs from Tortoise. The following day, the 10th of September, they play TriPod in Dublin along with Wood Pigeon. Sure to be a treat.

The band released an official teaser trailer (kind of like in the movies – maybe they should have these on instead of all those bloody Coke ads before films) on their iLike Page yesterday: