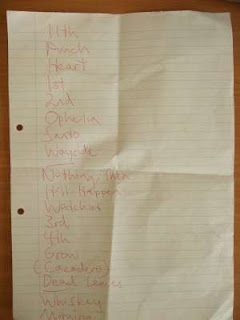 Great night had by all at The Sugar Club last night. I’m still feeling the effects (well, not really, but Bluegrass does equal Whiskey!) The above picture you see is a handwritten setlist by Chris Thile, a great entertainer and very, very funny man. I’ll write a full review on Monday. I woke up this morning singing ‘Punch Bowl’. That’s always a good sign about how good a concert was.