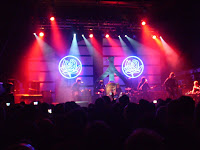 A totally different show from last year’s sit-down extravaganza at the National Stadium, where the setlist was:

This time, with a new album to support, the band was billed as The Cardinals, no sign of Ryan’s name on the bill. As a result, Ryan talked a lot less than last year, where he possibly did as much speaking as singing. It was also a much heavier show than last time out, with Ryan jamming away on ‘Natural Ghost’, like it’s a totally different song. Many many highlights from this show, especially songs we didn’t get to hear last time out. ‘I Thought Myself How to Grow Old’ was jaw-dropping, with Ryan pulling off some tremendous solo work. ‘Wonderwall’ was also a nice little treat, and I definitely wasn’t expecting to hear ‘Desire’.

The new songs sound so much better live than on the record, ‘Crossed Out Name’ being a special highlight. And after hearing ‘Stop’ live, my opinion of it has shot up. It sounds glorious with DRA on piano. One of the new songs which was absent was ‘Magick’ – which is this album’s ‘Halloweenhead’, and since he has played neither live for me, I’ll have to go again. Damn you Ryan!

The encore was yet another high point, bring out ‘La Cienega Just Smiled’ and ‘I See Monsters’, two (excuse the pun) monster tracks. Oh, and did I mention ‘Come Pick Me Up’? With the crowd singing along (well parts of it), it was beautiful.

Only major negative: no repeat of the amazing Joyce/Rose poster from last year. Guess I’ll have to make do with this t-shirt.

(Photo by Martina from www.ryanadamsarchive.com)