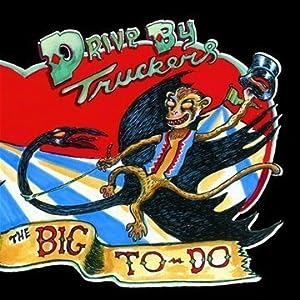 Drive-By Truckers – The Big To Do

The Big To-Do is the eight studio album from Alabaman rock juggernauts Drive-By Truckers. Their first, Gangstabilly came in 1998, and since then they have gone from strength to strength, with 2004′s The Dirty South marking their highpoint. They’re one of the most consistent bands around, and the departure of Jason Isbell following A Blessing and a Curse has allowed Shonna Tucker to shine. She contributed three songs to the lengthy Brighter Than Creation’s Dark, but here the songs really fit the mood of the album.

Another reason the band has improved on that last outing (and don’t get me wrong, BTCD is an outright four-star record) is that they’ve cut down on the number of songs on this album. It’s more cohesive than previous attempts, with only 13 songs on the physical CD release. In an interview with yours truly in December of last year, Patterson Hood said that the album was “very much a rock album. Very melodic and more rocking than anything since disc 2 of Southern Rock Opera.” From the opening chords of ‘Daddy Learned to Fly’ you realise he definitely wasn’t lying.

One part of DBT’s famed “three axe attack” that often goes unsaid is the harmony vocals, which really shine through on the oohs of ‘Daddy Learned to Fly’. Keyboardist Jay Gonzalez also figures prominently on the tune, adding to the melody rather than overshadowing it. There’s nothing on this album that is over-cooked. It’s all the perfect blend of balls-out-rock and memorable melody.

There are many brand new anthems here. ‘The Fourth Night of My Drinking’ is a wonderful tale of drunken recollection. Many of the lines are inspired: “The second night of my drinking / I was looking for my car / And as luck would have it / I found it parked outside my favourite bar”. The repeated refrain “It’s gonna be through with me before I’m through with it” will undoubtedly become a carrion call for many late night revellers. ‘This Fucking Job’ is another tune bound to connect with many listeners: “Workin’ this job is a kick in the pants / Workin’ this job is like a knife in the back / It ain’t gettin’ me further than the dump I live in / It ain’t gettin’ me further than the next paycheck”. A brand new anthem for commuters everywhere.

There are many highlights here. ‘After the Scene Dies’ is the song the Hold Steady wish they could write. ‘Santa Fé’ is a beautiful track with a gorgeous chorus. It also makes splendid use of John Neff’s pedal steel. Highly addictive. ‘The Flying Wallendas’ is a great example of how Patterson Hood can make a slow song work just as well as the more upbeat ones. The musicianship on it is immense, as it must be said it is throughout this album.

Mike Cooley contributes only a few songs to this album, but all are instant classics: ‘Birthday Boy’ opens with the brilliant image: “Which one’s the birthday boy / She aid I ain’t got all night / What your mamma name ya / You can call me what you like”. The song is full of gems like this: “Got a girlfriend don’t ya boy / Nervous hands can’t lie / Married men don’t ask how much / Single ones ain’t buying”. ‘Get Downtown’ is another Cooley-penned track, and is the album’s best song. It’s irresistibly catchy, featuring some marvellous guitar/keyboard interplay. Possibly the most upbeat track the Drive-By Truckers have ever recorded. His ‘Eyes Like Glue’ ends the album strongly, and is the only one of these 13 tracks that hasn’t been played live. Anyone yet to hear it will be impressed when they get a chance to listen, and based on the three Cooley-penned tracks here, the band’s Record Store Day release Your Woman is a Living Thing will be fantastic.

Shonna Tucker’s two contributions ‘You Got Another’ are fantastic ballads. ‘You Got Another’ is a song in the ‘I’m Sorry Houston’ mould, but is much better than its predecessor. It’s a lovely slow-burning tune and contrasts sharply with the rest of the album. ‘It’s Gonna Be (I Told You So)’ is even better. It’s short, snappy and doesn’t outstay its welcome – kind of like a rockier Stevie Nicks.

There’s a few weak spots on the album. ‘Drag the Lake Charlie’ is great lyrically, but slows the mood down in the first half of the album. It probably would have fit in better in the second half. Similarly, ‘The Wig He Made Her Wear’ goes on for too long at nearly six minutes, and should have been cut from the album entirely.

However, the highpoints far outnumber the weak spots. Overall this is a marvellous album, and worthy of standing alongside Drive-By Truckers’ finest records. Another fantastic release to add to an already wonderful catalogue. Bring on Go-Go Boots…