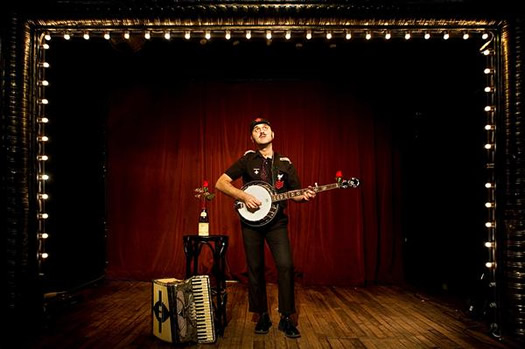 Franz Nicolay has branched out. He released his debut solo album Major General last year, and announced that he was definitely leaving the Hold Steady earlier this year to pursue his solo endeavours properly. He’s an infinitely charming gent, and talked to me about being thought of as “foreign”, the freedom of going solo, piracy, his musical heritage, his unique look, as well as what he has planned next.

What was it like to be going back to performing solo after being in a band for the last few years?
It was great to feel stage fright again. I only get stage fright when I’m reaching a new plateau – the first time I played New York, the first time on television, the first time in front of a festival crowd. It’s like a mile marker letting me know I’m getting somewhere.

Are you enjoying the freedom that comes with being your own boss?
I really enjoyed the six weeks off between the end of the Guignol tour in December and these solo dates in February. I hadn’t had six weeks without a show in probably five years. And I get to say yes to one-off projects that I wouldn’t have otherwise been able to do. For example, Guignol is going to score a two-reel Russian silent film from 1927 and perform it in Philly and New York. That said, I got itchy by the fifth week off and left a day early for tour just because I could.

Your debut solo album, Major General, was well received. Do you pay any heed to reviews?
John Barrymore had excellent advice on the subject of reviews: “One should never read them. If you don’t believe the bad ones, why should you pay attention to the good ones?” A compliment is always appreciated.

Do you ever google yourself?
The days after I announced that I was leaving the Hold Steady broke me of that particular vice, which is a plus. As disturbing as it can be to “overhear” strangers saying negative things, it was equally unnerving to hear positive retrospectives of my time with the band, which had the quality of obituary.

And what is the strangest thing you’ve ever heard about yourself?
People have all kinds of theories about whether Franz Nicolay is my real name and what my ethnic heritage is. I’m often identified as whatever the local signifier of foreignness is. For example, only Americans ever think I’m French.

What should we expect from the follow-up to Major General?
I just demoed all the songs – I might write one more – so for the first time I know in a general way what it’s going to be like: I was surprised at how much plague and apocalypse there was, and a general sense of Old Testament morals and judgement. I’m also going to work with a third-party producer for the first time. Because I already kind of know what a record I make by myself is going to sound like, and I don’t ever want to be the kind of person who makes the same record twice. I like records where when I put it out, there’s at least a few things on where when I listen to them I’m not sure whether they were a good idea. Laurie Anderson says, “It’s good to take a long view and think, what would I really like to do if I had no limitations whatsoever?” I think it’s good to take a long view and think, this isn’t going to be the last record I ever make, so I don’t have to use up all my ideas now.

And when can we expect it?
My hope is to record it in May and June and be ready for a fall release.

Will you be working with the same people (Brian, Yula, and Jared) who played on your debut?
I think the cast of characters will be larger on this one, but I sure hope Brian, Yula and Jared are involved. They’re all pretty busy right now with other projects. Brian has played on most of the sessions I’ve done in the last two years – “St. Sebastian,” and the Debutante Hour album I just produced, and we’ve talked about trying a few shows as a duo. I don’t think the process for this record will be the same – by which I mean, rehearsing and recording as a rock band.

You play a lot of instruments, when and how did you start?
I started playing violin when I was five, piano a year later, French horn at nine or so, guitar of course at fifteen, mandolin at seventeen, and accordion about ten years ago. Partly it’s because I need to rediscover music every few years, if that makes sense. And from a strictly quotidian point of view, I figured that I’d never be the best piano player in New York, but that if I was OK on a lot of things I’d get more gigs and have to hire fewer people on my own records.

And what is your favourite instrument?
It’s almost always the new one, which right now is the banjo. Inevitably I write new songs as part of the learning process, and that doesn’t hurt my affection for it.

Is there any instrument you’d love to start playing?
I’ve always loved the sound of the bandoneon – the oversized concertina most associated with Piazzolla and tango ensembles. But it’s such a specialty instrument that it’s near-impossible to find one priced for an entry-level player, and it’s fiendishly difficult to learn, for technical reasons involving the button layout. I’ve always been a shockingly bad drummer, but there’s really no hope for me to start now. Bobby Drake gave me a practice pad and a pair of sticks and was trying to help me for about a year, but I think it’s a lost cause.

How do you approach songwriting?
It’s like a snipe hunt and also like a dishwashing job. Sometimes you have to stalk them and trick yourself into them; sometimes you just have to sit down and do the assignment. Once in a very rare while, you get a gift. I woke up at about six in the morning a few weeks ago with a fully-formed song from a dream. Usually I either roll over and lose it, or scrawl something down that turns out to be not good at all. In this case it was a really good two-character scene. But you can’t depend on that kind of thing. Some people say, “How do you get so much done?” I think most musicians don’t treat their job like a job. A day is a long time if you sit with your instruments the whole time.

What is your favourite song that you have written?
I have a new song called “Felix & Adelita” that I think is really good, and the kind of stage-direction song I’ve not written up until this point, though I’m not selling it well enough yet live. “Cease-Fire” off “Major General” is exactly the song I wanted to write when I started to write it (though it’d be better with a bridge).

How do you feel about online piracy?
I think that it’s really hard to criticize people who want to hear music, and hard to criticize a world that allows me to find DeZurik Sisters 78s from my bedroom. That said, records don’t cost any less to make, and merch sales don’t make that up, no matter what people say; and the more record companies that go under because people don’t buy, the more artists pay for them out of pocket, and the longer they go between making them, and the sooner they’re going to stop. I see people on message boards asking for an artist’s entire discography and it’s just discouraging; because if I asked for $15 for a CD at a merch table those are the same people who tell me that it ought to be ten; then buy one, turn, and tell their friend they’ll burn it for them.

I have a theory that for a long time there were only two models for making a living in music – the patron and the troubadour. Either you worked for a rich patron and tried to get what artistic satisfaction you could while doing their bidding; or you hit the road and eked out a living playing for change, food, and a roof over your head. Then, for a brief period, there was a third: the recording artist, who stayed at home and made works for mechanical reproduction. It seems that that hundred-year window may now have closed, and that we’re back to the patron model (now redefined as licensing for film and TV) and the troubadour model (hit the road and sell your T-shirts).

You have your own unique look – how did that come about?
The moustache was a 1999-vintage whim. I’ve always worn hats – literally since my childhood, as a toddler I had an engineer’s cap I loved, and I wore a great variety of hats all through elementary school ranging from velvet berets to elaborate Chinese dragons. You can imagine the social consequences (my hairline has also probably suffered). I like to dress up; I like how characters in Kusturica films look, and I stole the sideburns from the narcoleptic Argentinian in Moulin Rouge. I have a deep and abiding belief in the efficacy of a good schtick.

Who are your biggest influences?
Charles Ives, Charles Mingus, Borges, Moondog, Nabokov, Gene Fowler, Tom Waits, Bob Dylan & The Band, Ivo Papasov, American Music Club, de Chirico, Scott Walker, TV Smith, the Muppets. In terms of artists who really set me on different courses when I first encountered them, and to whom I can go back if I need a nudge or a shove.

You have probably have more time off now, how do you wind down when not touring?
The usual ways: I learned to cook noodle soup, which was not difficult; I took some tap-dance lessons, which were; I went to the Visionary Art Museum in Baltimore, which was fascinating: it’s a museum of outsider folk art. I was particularly fascinated by an artist called Renaldo Kuhler, from North Carolina, a scientific draftsman by trade who has spent most of his life creating a detailed imaginary country called Rocaterranea between the borders of New York and Canada, whose language is a mix of Slavic, Yiddish, and Spanish; and whose costume and political history has a whiff of Tsarist Russia. I don’t actually have more time off – I’m scheduled to be touring 2-3 weeks out of every month through August.

If you could describe your music to someone who has never heard it before, what would you say?
Anarchic archaic.

Have you any plans to come back to Europe for your solo tour?
I’ll be in Holland and the UK in March, then back for continental dates in July.