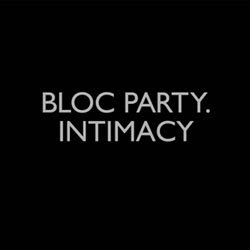 Another case of follow in the footsteps of Radiohead/Raconteurs/NIN/whoever, with the official announcement for Bloc Party’s third album Intimacy. Last night during a webchat it was announced that their new album will be available for download August 21st (this Thursday), with a physical release to come October 27th. Fans who wait for the CD/Vinyl will be treated to some extra songs.

The press release claims: “Some songs are Bloc Party at their most wildly experimental, while other tracks are simply classic Bloc Party, fitting in seamlessly amongst fan-favourites ‘Helicopter’, ‘Banquet’ and ‘So Here We Are’.”

I do not want new experimental stuff if their recent single ‘Mercury’ is anything to go by. Stick to what you’re good at lads. Anyway, we’ll all get to hear how good it is in just two days.