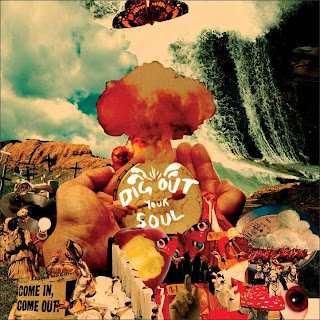 Oasis – Dig Out Your Soul

Don’t Believe the Truth was the return everyone was hoping for. But returns aren’t always a good thing. Think of Kevin Keegan at Newcastle or Nasty Nick in Eastenders. The return may originally seem good, but then ends up reverting to averageness or even worse. This is what has just happened with Oasis. Their seventh album (released in Ireland last Friday), Dig Out Your Soul is not a continuation of their return to form. Instead it’s their return to being average.

There are elements of the good ol’ Oasis here. But sadly not enough. A few of the tracks in the first half could have made Don’t Believe the Truth (of course there’s no ‘Masterplan’, ‘Live Forever’, ‘Wonderwall’, etc.). Opener ‘Bag It Up’ will make a great single, with its excellent chorus – this is what Oasis does splendidly – big choruses. Remember ‘Lyla’? Well, you’ve probably heard ‘The Shock of the Lightning’ on the radio. Same sort of feel right? Nothing wrong with that. It’s just a pity it doesn’t happen more often on the record.

At first I thought ‘The Shock of the Lightning’ wasn’t a great song, it was just alright. But in the context of the album, it’s one of the standouts. That should probably tell you how good the album is as a whole. Don’t expect anything better.

Oasis can still pull off the good slow track (kind of what Feeder have been doing since the death of Jon Lee). ‘I’m Outta Time’ is the best song on the album, gentle but never boring. It also is probably the point where the album should have ended as an EP. The remainder of it is all a bit samey. It’s Oasis by the numbers.

Imagine how cool that would be a Paint By Numbers album? 1 = Vocals, 2= Lead Guitar, 3 = Rhythm Guitar, 4 = Bass, 5 = Drums, and then there’s 6-10 for small little flourishes here and there. But if you were to look at the Paint By Numbers chart for Dig Out Your Soul, there’d be a lot of 3 and not much 6 to 10. ‘Get Off Your High Horse Lady’ is an awful tune. It tries to be ‘The Importance of Being idle’, but ends up more ‘The Importance of Being Trite’.

There is half a good Oasis album in here though. There will never be another great Oasis album, just like the way Kevin Keegan will never win any sort of league title, but there may be something left to produce a consistently good effort. Maybe an FA Cup final run or somthing.

[At the time of writing I couldn’t think of any recent Man City comebacks. That probably would have been more accurate. But they’re all about the billions and Brazilians these days.]