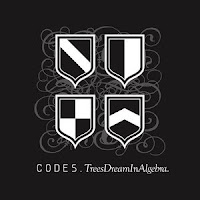 Few Irish artists have great debut albums. It takes most of them years practicing their craft before the release an essential record. CODES have taken their sweet time about making and releasing their debut, and as a result, it’s one of those rare beasts – a stellar debut album.

‘Malfunctions’ serves as an introduction to the record, but is not a reflection on what’s coming up. As soon as second track (and single) ‘This is Goodbye’ gets going, you know you’re onto something special. It’s a song already crying out for an arena tour, and maybe even a stadium tour. It has everything needed to make it a live classic, it soars and droops, returns, and is a powerhouse of a tune.

Another great masterstroke is how each song segues into the next, making this a compellingly cohesive album, rather than just a bunch of songs. Thus ‘This is Goodbye’ sails into ‘Guided by Ghosts’, a song better than the majority of the new Muse album. The production of this song and the rest moves the album above many other Irish releases as it’s so glossy – this is all thanks to Manics helmer Greg Haver. Listen to ‘Our Mysteries (Missed Histories)’ to see what I mean. On a different record, this would have a raw edgy feel, but thanks to its smooth edges and shiny sound, it sounds like a single waiting to happen.

The album isn’t just shiny, it’s glorious lyrically as well as musically. ‘Telos’ is a lovely soft intimate instrumental interlude, worthy of Sigur Ros. The band excels all-round, and lyrics like this testify this brilliance: “The faded photographs of winter / In the spaces inbetween, I find your letter / That’s when I begin to wonder, if all the hope in a new year could bring you back”. Beautiful.

There are tonnes of possible singles on this album, and each listen will bring a different favourite track. That’s the power of this debut. Every song is a standout. ‘Memorial’, ‘Starry Eyed’, ‘Cities’, everything I’ve still to mention, is fantastic.

One of the best albums of the year, and a debut to stand alongside Fight Like Apes last year. Five stars. If I could give it six, I would.

Watch ‘This is Goodbye’: