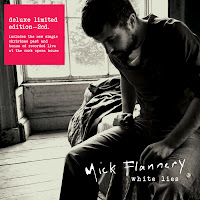 Another day, another interview. If only every week was like this! My latest victim is one of Ireland’s finest young songwriters, Mick Flannery. The Corkman speaks about recording with a big label, the joy of playing live, Christmas albums, and how he approaches songwriting. He also shows his own love for fantastic music by picking his best album of the decade.

Did you find it a very different experience making White Lies with EMI after self-producing your debut?
I did yes. I was very much out of my comfort zone, a bit lost really. I was working with a new band and even though they were great I realise now how long it takes a group of people to actually become a band. I find we play the songs a lot more interestingly now at gigs than we did at the time of recording. EMI, Willie Kavanagh in particular, were very patient and understanding during that time, I suppose down to having seen it all before. I definitely learned a lot from the experience so I have no regrets really.

‘Mad Man’s Road’ is one of your oldest songs, will we ever get to hear a studio version?
There is a recorded version from those sessions we did for White Lies. The recording is fine we just felt it didn’t fit in with the rest of the album so we held it back. It may be released later on sometime.

There’s a song on your self-titled EP called ‘Christmas Past’, would you ever have an inkling to make a Christmas album?
I don’t think so. I’m not averse to themed albums but nothing as pansyish as a full dose of festive drivel.

Do you pay much attention to awards? You were nominated for Choice, and won at the Meteors. Were these proud moments?
I’ve forgotten about them. It was nice to have been nominated. No matter how modest or humble any band is, us included, they still want recognition for what they do and it is nice when it comes,

You lived in New York for a few months to try your hand at making it as a musician over there, what happened?
Mostly drinking to be honest. Very little in the way of ambitious endeavour.

You now play all over Ireland, do you enjoy touring and playing live?
I do, very much so. I’m very lucky that we all get on very well and have a good time in each other’s company.

You’ve often spoken of your love of Tom Waits, Kurt Cobain, Bob Dylan, Ryan Adams etc. Who is the best act you’ve ever seen live? And have you taken anything from their show to put into your own?
Waits and Leonard Cohen are the best I’ve seen live. I don’t consciously rip any specific things off for our gigs. I’m always aware of the need for a few more upbeat songs to make a gig enjoyable for an audience.

How do you feel about collaborating? Is there any act you’d love to work with?
I’ve tried it in the past with no real results. I think I’m too shy really to write with other people.

How do you approach songwriting?
I have no particular approach. Ideas come at strange times so I keep a recording thingy with me and then work on the idea when I have the time. Mostly music first lyric afterwards.

How important are reviews to you? Do you google yourself to see what people are saying?
Reading a good review is nice but I don’t really pay a whole lot of attention to them.
I’ve never googled myself no, but now you asked I might, strange.

Do you ever get recognised in the streets?
Only by people I know really.

What advice would you give for younger musicians trying to make it?
A good manager is extremely important, someone who looks out for your interests no matter who they have to go up against.

What’s next for Mick Flannery? More touring? A new album? An EP? A rest?
All of the above really. We’ve started doing demos for a new album. Hopefully we’ll be able to release next year.

I’m asking everyone this at the moment. What’s your favourite album of the decade? And your favourite Irish album?
Ryan Adams, Heartbreaker. Van Morrison, Tupelo honey

Mick Flannery currently has a deluxe re-release of his excellent White Lies in stores. It includes an extra special bonus song, as well as Mick’s entire live performance at the Opera House in Cork last year. The bonus song, ‘Christmas Past’ with Kate Walsh, can currently be heard on Mick’s MySpace:
www.myspace.com/mickflannery

And you can buy the deluxe edition White Lies here:
iTunes