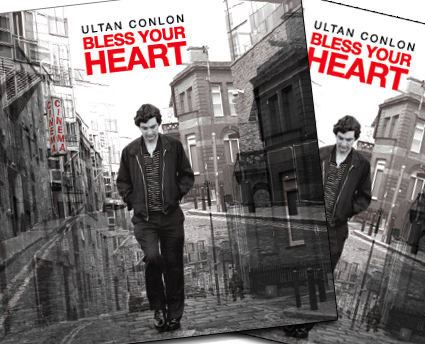 Ultan Conlon released his debut album Bless Your Heart recently, and the new single ‘The Universe Tune’ has just come out. The album and single are fantastic singer-songwriter stuff in the Ryan Adams/Neil Young/Bob Dylan mould. Ultan took some time out from his nationwide tour to discuss recording his debut album, his songwriting process, as well as playing live, and collaborating with legendary guitarist John Martyn.

Let’s start at the beginning: when did your musical heritage begin?
I started playing guitar at the age of 11: A nun in the convent I went to taught a bunch of us after school, but I didn’t really get into it until I was 14 when a neighbour at the time started to teach me Dire Straits and the like. I started writing shortly after.

What were your early songs like? Still playing any of them now?
They were ok I guess, teenage stuff really. I still play couple of songs I wrote when I was 19, 20 but dont really venture back before then, they’re repressed songs at this stage. *laughs*

In 2002 you recorded a live EP. At the time, did you always know you’d be a musician?
No not at all, I was working at the time and really doubted myself about actually being a musician at all. It was only after John Martyn recorded ‘Really Gone’ in 2006 that I said to myself “ok, this is what I do and this is what I’m always gonna do”.

How did the John Marytn collaboration come about?
At the time I played with a terrific singer songwriter from Galway called John Conneely in a Simon and Garfunkelesque Duo. We supported John Martyn on tour and he took a shine to that particular track and agreed to do some vocals on it. He pretty much made that version his own and thats how it all came about. It was a very exciting time for me.

What did you learn from working with John Martyn? Did he have any advice for you?
Sure, I had a bad habit of always singing on the kick and he advised me to swing my vocal, which over time I’ve taken on board. Sorry that probably means nothing to a lot of people, but it did help me record my own album. It was actually invaluable advice.

What was it like recording your debut album, Bless Your Heart? Had you all the songs written before you went into the studio?
I had lots of songs but they came from everywhere, some fast some slow so I think that could be harder than starting from scratch sometimes. I started to record some of the ones I knew were gonna go on there, and I also started writing some as we went along. We had the luxury, and sometimes the burden, of having the studio set up in the house we rented, so we were not under any pressure time wise. I just felt the album out over time, and there is a mixture of old and new songs on it, but I did try to make it feel like a complete piece of work.

So how do you write songs? Do you have a particular process?
Usually I’ll fiddle round with melody and chords. I can sometimes start with a concrete idea in terms of theme and write lyrics accordingly. It can differ in many ways. I do spend some time on songs though and can change them over months until they’re ready to stand up for themselves. I still find it a fascinating process with no hard and fast rule. Sometimes they just come to you ready made which is great and then there are the Ikea ones which can be tricky! *laughs*

Your current single is ‘The Universe Tune’, which has been very well received. Do you pay attention to reviews?
I do at present because I’m starting out in many respects. I want to get this album and my songs to as many people as possible. I look on them as promotional tools I guess. The album and single have been well received by anyone who has reviewed it and I’m very pleased by that. Once they start slating me that’s when I wont pay attention to reviews and tell you they don’t matter. He, I’ll justify it in some way!

Speaking of reviews, how do you feel about being compared to people like Ryan Adams or Damien Rice?
I don’t mind in the slightest! Damien Rice made one of the finest albums ever in my opinion. If he never stepped back inside a studio he would have nothing to apologise for. O is timeless. Ryan Adams is just incredible when it comes to output. He seems to put out a couple of albums a year which is insane. I’d gladly take a leaf out of both books!

Playing live is also a great way to get attention, you’ve got a few upcoming dates around the country. Do you enjoy playing live?
I do and I don’t. The thoughts of it sometimes scares me because I guess I feel like more of a writer than a natural performer, so it’s taken me some time to get used to playing my songs in front of people. However, when you are up there and it’s a good crowd and all is going well, it is the only place you can really find the emotion the song deserves. It can be a terrific high, just amazing feeling. I have this wonderful band and I can’t wait to get gigging with them again.

Who are your influences?
I guess Leonard Cohen would be one of my favourite artists. It’s about the lyrics for me first and foremost, good diction and lyrics! If they are delivered with real emotion then vocal skills and musicianship can sit in the back. In saying that a beautiful melody is very, very important, and Leonard Cohen can certainly do that. I also like Van Morrison, Gram Parsons, Grant Lee Philips, Roy Orbison….anyone who pens a genuinely good song…It’s all about the song!

What’s next for Ultan Conlon? What are your plans?
Hmmm, Well in March I’ll be all over Ireland, and April I’ll be in the UK gigging so that will take priority. I’m writing and demoing songs in my free time so I’ll try and take everything as it comes and just keep moving forward.