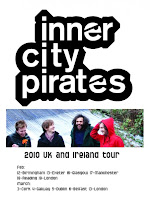 Innercity Pirates are an Irish-Welsh band, and are due to release their debut album Cutting Noses, Chasing Tales later this year. It’s produced by Pedro Ferreira (The Darkness), and promises to be a great rock record. One of its singles ‘Dedication’, has already featured in a Guinness advert!

To give you a sneak peak of what you may hear, the band’s singer, Russell, has given me two of the tracks from the album as free mp3 downloads.

I know many of us are trying to scrimp together the pennies to afford Oxegen tickets, so the best news about their Irish tour is that it’s free entry! They’ll be supported by the Laurel Collective on their entire UK & Ireland tour.