If you were wondering what Conor O’Brien did between the Immediate and Villagers, here’s what he was up to. Well, actually not, but just compare their voices. Identical. 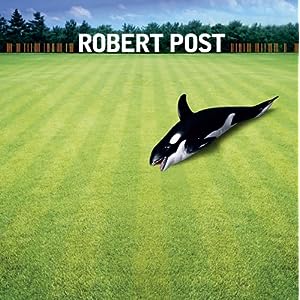 We here at twowaymonologues are big fans of Scandinavian music – after all, the website is named after the second album of Norwegian singer-songwriter Sondre Lerche (for those who didn’t know). A few months ago, I selected Robert Post’s ‘Got None’, an early single from his debut album for Track-Fu. Unfortunately neither Dan nor I could locate the song, and something else was entered in its place. The album itself wasn’t easy to find either, and after much searching (like Terri’s attempt to find Jamie Lidell, or Brandon’s attempt to find Waldo), I came across the album in a second-hand record store in Dublin (if you’re ever in Dublin, make sure you give Freebird Records a visit!) So now, some months after its European release, I can finally review it.

The album opens very strongly with ‘There’s One Thing’. It’s somewhat similar to the kind of music the aforementioned Lerche makes. And people from Norway sound great singing in English – it’s something about the accent which works so well. The chorus here is really catchy, and the song has that familiar feel – like you’ve heard it before, even though there’s possibly no way you even knew who Robert Post was before you saw this review. For me, however, two of the songs here I have heard before – both ‘Got None’ and ‘New Born’ are in the rotation in the shop where I work (there’s about 300 or 400 songs, so you don’t hear them too often). The way Post sings “girls” on ‘Got None’ is more alluring than any way Hugh Hefner could say it! The chorus is really breezy, and the female backing vocals really enhance the song.

The trend of powerful memorable choruses is continued with ‘Silence Makes Him Sick’ – a percussion led song with a very pounding melody – think Eleanor Rigby for the modern generation. It’s not every day you compare someone to the Beatles. Post however, isn’t bigger than Jesus! The piano solo is notable, and sticks out as a strong point on an album full of strong points. ‘High Tide’ slows things down a bit, and replaces the powerful chorus with a nice soul-infused one. The female backing returns to prominence, and Post once again speaks of “girls” – damn I wish I could say it the way he does. That accent would get more women than Sean Connery’s accent!

‘More and More’ is another great pop song, and it’s a wonder why I’ve never heard it on the radio or seen it on MTV (probably because it’s not crap like Cribs or Room Raiders!) The song would be excellent live, as there’s a clap-track in the background, and it’d be sure to get the audience going. The album is full of great pop songs, and ‘Big Boat’ is another one. Although how anyone can be “on a date with the moon” I don’t know. Maybe it’s the man in the moon, he’s on a date with… The bridge section and outro here are excellent and sound like they wouldn’t have been out of place on Parachutes or A Rush of Blood to the Head.

‘New Born’ is a return to the powerful up-tempo chorus, and this chorus perfectly contrasts as well as compliments the verses. ‘Everything is Fine’ is a slower, acoustic number. Fortunately, Post does the down-tempo just as well as he does the up-tempo. It’s the album’s “sit down and get your cigarette lighters out” song. ‘Ocean & A Tear’, one of the best songs on the album, is quite similar to the album’s opener – and that isn’t a bad thing. It shows that Post’s lyrics are just as good as any native English speaker, as the tune is full of excellent maritime metaphors. The song itself is even like the sea: sometimes calm, sometimes choppy, and like Ishmael’s Oceans, very engrossing.

‘Come Home’ is the album’s weak point. It’s a slow song, and seems like there’s something missing throughout. The album’s bonus track, ‘Far Away From This Town’ also suffers from this symptom. It tries to be sentimental, but does this at the expense of what makes this album – strong pop hooks. It’s a nice little ditty, but unfortunately is just that: a little ditty.

Tracks to Download: There’s One Thing, Ocean & A Tear, Got None, New Born

8.0 – a very solid pop album, and ranks up there with Sondre Lerche and Norway’s finest. Let down by the last two songs though.